The Canadian Legion was founded in 1925 and charted in 1926 by a special act of Parliament. In 1960 Queen Elizabeth II granted the Legion Royal patronage and we became The Royal Canadian Legion.

The Legion was organized to support and service all veterans and their families. We are a non-profit organization (with no government grants) that not only services our veterans but also contributes to our local communities.

In many areas of Canada the Legion is the hub of the community. Our Branch was chartered in 1966, the founding members included E. Crafter, A. Hogue, D. Dick, C. Lewis and F. Bates.

At our Branch 613 Monday, Wednesday and Friday mornings around 10 a.m. you will find some of our vets and members gathered for a coffee, and contrary to people’s thinking their conversations are about everything but the W.W. II. Topics include local and world affairs, politics, village goings on, travel, healthcare and what the future holds for their grandchildren, great-grand children and for some great-great grandchildren. Once in a while they’ll clebrate a special birthday with cake.

At the end of their hour or so, they have solved all the troubles of the world just as they did some seventy years ago. They were so young but with age comes maturity, which brings wisdom!

Come join in for coffee and meet these wonderful people.

“They are not dead who live in the hearts they leave behind.”~ Cherokee Billie

Our Friday Night Dinners are Back! 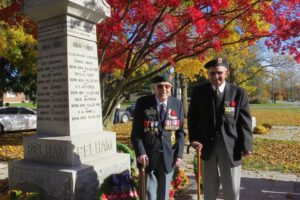 We are pleased to advise that our Branch has decided to begin producing our[...]