On Wednesday November 16th Comrade Jim Summersides and Comrade Cliff Driscoll were the guests of honour at a very special reception held at Lincoln Centennial Public School in St. Catharines.

When they arrived at the school they were greeted at the front entrance by two very eager, young students who escorted them to their Grade 5/6 classroom. The class teacher, Jane McLaughlin, thanked Comrade Jim and Comrade Cliff for coming to visit as part of The Memory Project – Le Projet Mémoire and introduced them to her class of 32 incredibly attentive 10 & 11 year olds.

She invited the children to gather around the two gentlemen and sit down for a time of story telling that they are sure to remember and recount for the rest of their lives. Comrade Jim shared the story of his introduction into the Special Forces and gave them a first hand glimpse into the life of a soldier in WWII. Comrade Cliff spoke of the role of Canadians and other United Nation’s Peacekeepers to help create the conditions for lasting peace in countries torn by conflict.

This was a classroom that had a very personal appreciation for the messages shared by our Veterans – the majority of the students were the children of new Canadians who had chosen to start a new life in Canada. Many of these children knew first hand the turmoil of daily life in times of civil unrest. They were a very attentive audience with many insightful questions that Comrade Jim and Comrade Cliff found to be remarkable for such a young audience.

It was a heart-warming, inspiring experience for them to interact with children from so many cultural backgrounds and they certainly appreciated the high level of their genuine interest and respect.

The Memory Project is a nationwide bilingual project that connects Veterans and Canadian forces personnel with the opportunity to share their stories with Canadians in classrooms and community forums. In addition to the Speakers’ bureau, The Memory Project has created a record of Canada’s participation in various global conflicts, including the Second World War and Korean War, through oral interviews, digitized artefacts, and memorabilia.

The Memory Project is an initiative of Historica Canada and is made possible with generous funding from Canadian Heritage and Veterans Affairs Canada.

Our Friday Night Dinners are Back! 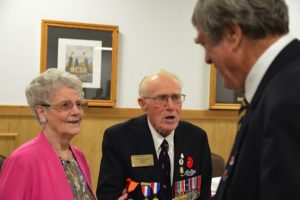 The concept of the Heat and Serve Dinner initiative for[...]